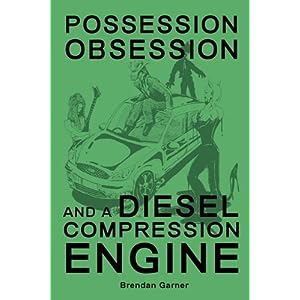 Okay, I'm needy. Please validate me by reviewing my work. Your efforts will not go unrewarded. The first three people to review either THE POINT or WEE ROCKETS on Amazon (and notifies me about it by leaving a comment on this post) will receive a signed copy of my rare chapbook, POSSESSION, OBSESSION AND A DIESEL COMPRESSION ENGINE. It's a collection of six interlinked humorous-horror short stories, the first being the piece of flash fiction below that'll give you a taste of the style.

This offer is open to all countries. It's a light book (45 pages) so postage isn't an issue.

He lay in his bath of blood and sang O Fortuna at the top of his voice. The blood had cooled and clotted, but he felt far too comfortable to be bothered with scraping off and getting dressed. This was the only time he had to himself, away from the office politics and embezzlement investigations. He wanted it to last for as long as possible. Besides, this one had taken more effort to fill than previous baths. His muscles still ached from the exertion.

The best bathing blood had to be extracted from frightened accountants. The easy part had always been scaring them; you just told them there was a problem with the bottom line or gave them a debit-heavy Balance Sheet. The tough part was catching them. Those chaps worried so much they built up an unhealthy supply of nervous energy. As soon as they got that adrenaline rush they moved like lightning. Skinny fellows they were too. Very hard to hold on to when they squirmed.

This particular bath had taken him a whole day to collect for. The effort of the chase, the strength expelled twisting the accountants from their ankles to their necks, holding them upside-down over the bath; it vexed.

The only motivation when under such a strain was the promise of that pop; the sweet sound of a head letting go when it reached the maximum point of elasticity. And the splash-back refreshed him so much he was always able to twist one more. Corny but true; the harder you worked at something the sweeter the reward.

He relaxed and thought about the time he tried to fill the bath with lawyer blood. Now there was a lazy species. It took barely three hours to gather enough of them to fill his bath to the brim. Such a slovenly bunch. Not one of them tried to run or even struggle in his grip. Half of them attempted to bargain their way out of it with a jumble of highbrow words. Hitherto and henceforth and whatnot. The others did nothing at all, the sudden change from hunter to hunted too much for their shark-like minds.

Although the easiest bath he’d ever prepared, he hated it. It took three accountant baths to get rid of the toxic smell. Lawyer blood emanated a horrid whiff. And it clotted at an alarming rate. It formed a thick skin on the surface that hung from his shoulders like a cloak when he climbed out of the bath. A wonderful effect visually, but damned impractical. He rarely experienced the heebie-jeebies, but those lawyers hit all the wrong buttons. He vowed never to have anything to do with that species again. It wasn’t worth the hassle.

He gazed upon the emaciated accountants strewn around the floor. He sometimes worried there would not be enough to keep him in bath blood forever. The thought made him uncomfortable and he knew it could not be ignored. Every batch got skinnier and balder than the last. Not a great sign. But he had to bathe. It was his great escape.

He would begin experiments with alternative sources. Perhaps scientists were a good place to start the experimentation. It had a certain poetic justice to it.

The sticky, clingy feel of congealed blood interrupted his thoughts. Cursing, he got to his hooves and stepped out of the bath. He picked up the nearest twisted body and wrapped it around his waist. He still felt good about discovering a use for the broken remains. If only he could utilise all the pairs of spectacles he had accumulated. It seemed such a waste of good honest craftsmanship to let them gather dust in his spare room.

With a sigh, he picked up his trident. In one last instant of escapism he upended it and held it like a guitar. He fingered a silent pentatonic blues scale; the one he liked to play at the crossroads. Thunder rumbled in the back of his throat. Time to get back to the office. The place just fell apart without him.

A-ha, I recall the use he find for the spectacles! I won't be writing a review for reasons we've already dicussed, but I hope a few folks take up the offer of a free chapbook. They'd be mad not to.

Well, I just posted one on Amazon, but I'm not sure you shouldn't give the prize to one of the people up the line who did it without any incentive at all.

I'm glad to have gotten around to it--should have done it before. I'm never sure exactly where I should be standing in relation to Amazon, as it's the neighborhood bully in these parts, but gotta help the writers out, don't you?

Gah, just wrote a massive comment about Amazon and indie bookstores but Blogger ate it. Short version - I prefer bookstores but many of them don't stock me, therefore I have to rely on Amazon. But No Alibis is an exception to the rule. Dave stocks my work even though he makes a pittance from sales because my publisher can't afford a massive discount. So rock on, Mr Torrans.

And a deal's a deal, Seana. Can you email me your address? brennanfiction (at) gmail.com

Thanks a million for the great review!

Well, I'm obviously not going to try harder to talk you out of sending me a copy!

I don't think the moral dilemma should really be yours or other writers. If you do the best you can for the indies, no one can ask more.

Sorry I missed out on this. I got a paperback copy of "The Point" but haven't had a chance to read it, yet; too much work this last month. But I will and will review it. I have a feeling it'll be favorable; I glanced at the first couple pages.

The offer's actually still open, sir. So far only one person has claimed their chapbook -- and I had to talk them into accepting it!

Heh, sorry. Couldn't resist dramatising it a little. :) Forgive me.

No, I thought it was funny, but I didn't want Kyle thinking the fan base wasn't eager to have signed work...

Right enough. I'd forgotten about Kyle... Good job you're looking out for me.

Hi Gerard - just posted on Amazon but it may take some time to appear - you can see the review on Goodreads here: http://www.goodreads.com/review/show/236428297

Is the offer still good? I love getting these 'hard to find / limited press' books :-) I'm such a nerd!

Hi, Josh. Thanks for stopping by.

Yes, sir, you can still claim your chapbook. Just email me with your address at brennanfiction(at)gmail.com and we'll get that sorted.

Hee hee - liked the story. Very vivid and imaginative. Good line to end it on too.

Perhaps I should point out, Gerard -- I live in the US. Oh, and I'm staring on "The Point" tonight. Finally.

Finished "The Point" this evening, Gerard. Man, it moves like a bat out of hell. I posted a review on Amazon in the Kindle store, even though I got a paperback copy. Lean, clean, and mean. Good job.

Sorry, Kyle. Your comments were caught up in my moderation thingy for months and I hadn't seen them... Thanks so much for the review but the chapbooks have been claimed already. Sorry about that. I can offer you a free kindle copy of the collection if you like...?