No Alibis Event - Burke and McKinty

No Alibis are very pleased to invite you to celebrate the launch of Declan Burke's latest novel, ABSOLUTE ZERO COOL, and FALLING GLASS, the latest novel from Adrian McKinty, in the shop on Thursday 18th August at 6:00 PM.

Declan Burke was born in Sligo in 1969. He is the author of EIGHTBALL BOOGIE (2003) and THE BIG O (2007). He is also the editor of DOWN THESE GREEN STREETS: IRISH CRIME WRITING IN THE 21st CENTURY. His new novel, ABSOLUTE ZERO COOL, is published by Liberties Press in 2011. He lives in Wicklow with his wife Aileen and baby daughter Lily, and hosts a website dedicated to Irish crime fiction called Crime Always Pays.

Absolute Zero Cool is a post-modern take on the crime thriller genre. Adrift in the half-life limbo of an unpublished novel, hospital porter Billy needs to up the stakes. Euthanasia simply isn’t shocking anymore; would blowing up his hospital be enough to see Billy published, or be damned? What follows is a gripping tale that subverts the crime genre’s grand tradition of liberal sadism, a novel that both excites and disturbs in equal measure. Absolute Zero Cool is not only an example of Irish crime writing at its best; it is an innovative, self-reflexive piece that turns every convention of crime fiction on its head. Declan Burke’s latest book is an imaginative story that explores the human mind’s ability to both create and destroy, with equally devastating effects.

Adrian McKinty was born and grew up in Carrickfergus. After studying philosophy at Oxford University he emigrated to New York City where he lived in Harlem for seven years working in bars, bookstores, building sites and finally the basement stacks of the Columbia University Medical School Library in Washington Heights. In 2000 he moved to Denver, Colorado where he taught high school English and started writing fiction in earnest. His first full length novel, Dead I Well May Be, was shortlisted for the 2004 Ian Fleming Steel Dagger Award and was picked by Booklist as one of the 10 best crime novels of the year. In mid 2008 he moved to Australia. He is currently working on a new crime novel for Serpents Tail called The Cold Cold Ground. His website can be found here. 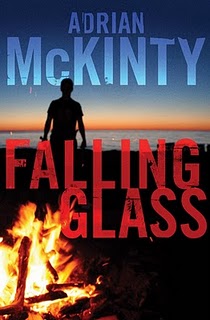 An old associate of regular McKinty hero Michael Forsythe, Killian makes a living enforcing other people's laws, collecting debts, dealing out threats. Now Forsythe sets Killian up with the best paid job of his life. A prominent, politically connected, Irish businessman, Richard Coulter, needs someone to find his ex-wife and children - for half a million. Reluctant to take it, but persuaded by the money, Killian travels across the world for his briefing from Coulter himself. Once on the trail, Killian discovers the real reason Coulter's ex is running, and helps her take refuge amongst his people - a community of Irish Travellers, who close ranks to look after them. McKinty is at his continent-hopping, pacy, evocative best in this new thriller, moving between his native Ireland and distant cities within a skin-of-his-teeth timeframe.

We, expect this event to be very popular, so avoid disappointment and book your spot early. You can email David, or call the shop on 9031 9607.

You'll be there yourself, I trust, Mr. Brennan?

If there was one event I could choose to go to this year, this would be it. Hoping to find a recap with pics online. My fav two authors at one event. Best of luck guys!

Seana - Yes, I will, though I'll be hopped up on painkillers thanks to a bout of tonsillitis. A small price to pay. Unfortunately, I'll not be able to have a pint after the event... Ah, well.

Sean - We're definitely spoiled over here. Next month Alan Glynn and John Connolly are doing a joint launch at No Alibis.

I was going to say that this makes you the only reliable witness, but I guess that depends on how strong those painkillers are...

Hope it was great.

sure, go ahead, rub it in. Hope you feel better!